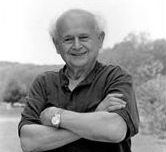 Moshe Feldenkrais (1904-1984) was a brilliant man, a pioneer of the mind-body movement.  Formally qualified as an Engineer he created The Feldenkrais Method ®.  He followed his curiosity about how he could self-heal a debilitating soccer knee injury at a time (the 1930’s) when knee surgery would likely have left him unable to walk.  Through self-study he began to identify how the brain and the nervous system were central to all movement patterns.

In 1919 aged 15, Moshe travelled from Poland to Palestine, where his Jewish extractions led him from necessity to learn and teach unarmed combat and self-defence.  In 1930 he moves to Paris learning French and studying Engineering.  His self taught self-defence attracted the attention of Judo Master Jigora Kano.  He becomes the first person outside of Japan to obtain a black belt in judo, opened a Jiujitsu school and wrote many books on Jiujitsu.  He worked at the “Institut du Radium”, the birthplace of atomic physics, under Joliot-Curie.

Amongst the chaos of June 1940 he departs France for England.  He carries sensitive documents on “heavy water” from Joliot-Curie, convincing Commander Ian Fleming of Bond fame to allow him passage.  He worked in the UK as a research scientist developing underwater harbour defence mechanisms vital in the British war effort.

Moshe was interested in the fields of psychology, hypnosis, physiology, neurology, anatomy, early human development, physics and engineering.  Combined they formed his ideas on how the mind and body are intricately related.  Expanding physical movement influences the mood and feeling of a person.  He continued to develop and expand his method until his death in 1984.

Moshe was well ahead of his time and understood the theory of “brain plasticity” before the term existed.  It is in the brain that changes occur in order to overcome the problems and limitations felt in the physical body.  He found mindful movement to be the key that leads to the improved awareness that is achieved using The Feldenkrais Method ®.

Anat Baniel was one of the Moshe’s original students.  She has created a comprehensive website HERE dedicated to providing detailed information about the life and work of Moshe Feldenkrais.  (You can ignore the Pop Up that appears there for the sake of the extensive information about Moshe).

Mark Reese has recently published volume 1 of Moshes Biography, “A Life in Movement”.

"Enhancing awareness increases strength and skill spontaneously. My intention is to stimulate a learning process so you can continue to improve on your own"